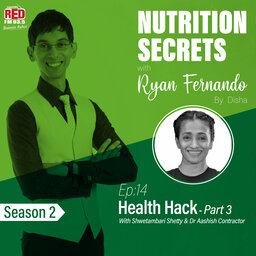 He is a nutrition coach and his one purpose is to change the way people eat so they can live a healthy life. After studying Food Biotechnology in Scotland, he relocated to India to work towards his goal. His list of prominent clients says it ALL. He designs diets for Virat Kohli, Anushka Sharma, Aamir Khan, Yuvraj Singh, Shikhar Dhawan, Abhishek Bachchan, and Olympic winner Sushil Kumar and that is just the tip of the iceberg. So what do these celebrities eat for the brilliant performances they put on? There is always a secret recipe to success and that is what you are going to discover in this podcast. Tune in to find out stealthy health and food secrets with the one and only Ryan Fernando