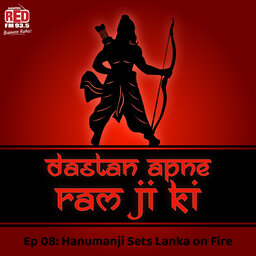 'Dastan Apne Ram Ji Ki' is a  lyrical rendition of the eternal epic in Urdu, based on old classical renditions of Holy Ramayana. It is obvious that Lord Ram and the performance tradition of Ramayana transcend both language and culture, and so we are proudly showcasing the story of Lord Ram in a new innovative idiom before enthusiastic audiences. Awarded Playwright Danish Iqbal earlier did a critically acclaimed version of Dastan-e-Ram on stage and here he is collaborating with India's first female Dastango Fauzia to bring this innovative offering before the discerning connoisseurs of art & culture to spread the message of inclusiveness and harmony.